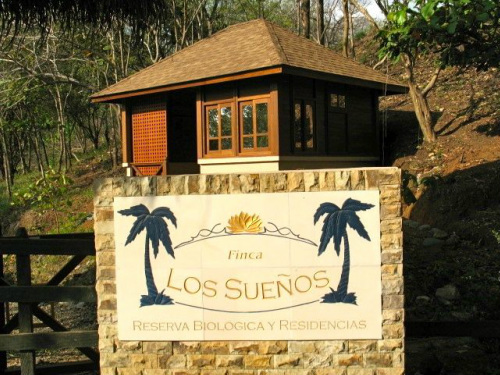 The Finca Los Suenos developer - a pilot and photographer - first saw the Rio Rosario in 1992 when flying over the Guanacaste coast in the dry season. Looking to find a suitable place for a nature community, he saw that the Rio Rosario basin was the most northern coastal area still lush and green. Also the rainy season was much more pleasant than in the south of the country.

He soon bought and merged several farms around the Rio Rosario river, selected unique building sites, built roads, gates, planted fruit trees, and installed water and electric lines. The first homes were built in the 1990s. The Hotel Luna Azul came in 2003 and was soon followed by many new homes.
Over the years, the developer bought more neighbouring properties and added homesites and enlarged the nature reserve as the community expanded to its final size.

In 2008, a group of lot owners and the developer started conversations to form a lot owners association, as a shared community of owners who would collectively decide on annual maintenance fees and how they were applied. The association would also be involved  a final reserve plan and work to legally own and protect the nature reserve which was donated by the developer.

As initially discussed, the new owners association would also handle the community’s water system, so in 2009 a water association (ASADA) was formed to manage the system under government regulations.

In 2010, we formed the Finca Los Suenos Owners’ Association S. A. (FLSOA), a Costa Rica corporation registered with 75 capital stock shares. The FLSOA’s purpose is to manage and maintain Finca Los Suenos, and to control and preserve the 86-acre nature reserve for the benefit of the community.

That same year, the FLSOA funded the formation of the new ASADA FLS to take over the water system. The ASADA was soon registered in the National Registry, the municipality of Santa Cruz and the AyA (Costa Rica’s water authority) as the official entity responsible for our water. A group of lot owners formed its board of directors and our water became officially registered.

In 2011, the FLSOA began to work with the developer to receive the nature reserve in perpetuity.  The efforts also involved finding a Costa Rica legal framework that would secure the nature reserve in perpetuity. After many lot owner negotiations, survey corrections and resurveys, the National Registry notified the FLSOA in 2014 that it had officially accepted the 86-acre nature reserve boundary. The transfer is now in the final stages to a trust to be managed by the elected FLSOA board of directors.
The developer also protects another 50 acre private reserve along the river, which he plans to eventually donate to the community as well.
works
In 2013, the ASADA FLS started various upgrades to the water system. The upgrades included a new north-side water holding tank with new pumping lines with a pressurized segment. Since the ASADA didn't complete the works, in 2015 the developer stepped back in and built a second water tank on the south side's highest location. A third well, already in place, will be connected to the new holding tank in 2016 to complete the approved system plan.