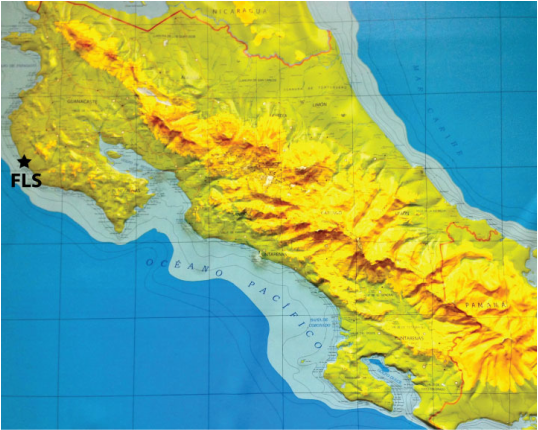 The strong NE trade winds that flow off the Caribbean have a dominant impact on Costa Rica's weather.

In Costa Rica's far north, the winds cross wide lowlands to lose most of their moisture. The winds are thus hot and dry when they reach Lake Arenal and the many volcanos northwest of it. Lake Arenal's low elevation and the low gaps between the volcanoes allow the hot winds to flow through and then impact the entire northern Guanacaste coast.

Those dry winds are what make Guanacaste the number one visitor destination in Costa Rica. Tourists love its dryer climate than the rest of Costa Rica. But those winds also turn everything brown, and also make that northern coast area west of Liberia the hottest and driest in Costa Rica.

But the topography from Lake Arenal south to Panama is continuous high mountains that block those same winds. That's why the entire Pacific side of Costa Rica below the Gulf of Nicoya has much higher humidity levels. And again, that's why Guanacaste gets the majority of tourism visits.

Our basin's lush tree canopies and green vegetation welcome wildlife and humans. You see it in the green, you feel it in the air, you hear it in the sounds. Most of our lots are high above sea level for much lower temperatures, light refreshing breezes and lower humidity levels. With near perfect year-round temperatures we hear the sounds of nature instead of the unnatural sounds of motors, compressors and fans. Indeed, we enjoy one of the finest climates anywhere on the Gunacaste coast.