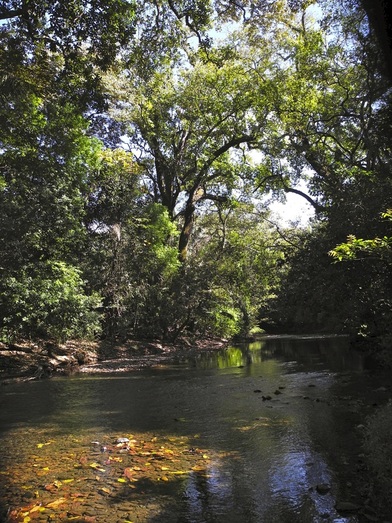 Finca Los Suenos is blessed by high quality surface and ground water. Our abundant water sets us apart from most other real estate developments on the Guanacaste coast. It comes from the Rio Rosario that starts about 10-miles east of us high on Vista Al Mar mountain. The river drains a remote watershed area that’s also Nicoya’s largest wildlife corridor. For most of its 10-mile length, it flows through deep inaccessible canyons.

Starting southeast of Tamarindo, low hills rise into a series of higher hills and mountains that are scattered down the spine of the Nicoya peninsula Cordillerra. However, the mountains are not continuous. Many gaps allow the hot NE trade winds to hit the coast unchallenged. Such a gap allows the hot winds to hit both Playa Garza and Nosara directly.

In fact, the Rio Rosario starts at the highest elevation of any river in the Nicoya peninsula Cordillerra. Its climatic location and large tracts of native vegetation provide a significant amount of moisture that has allowed natural tree cover to regenerate all along the river. The average temp on the summit of Vista Al Mar Peak is 72 degrees F; almost 10 degrees lower than the average down on the coast. Higher up are evergreens with mosses and bromeliads. The mountains high valleys and ravines are nourished by the cloud fronts that rise, cool and bring misty rain, even in the dry season. The mountain thus provides a near year-round flow of infiltrated water into the Rio Rosario.

Because of its remote canyon environment, the Rosario watershed is the most pristine of its type in the entire Chorotega Biological Corridor Plan of Costa Rica (the entire Nicoya peninsula). It runs free of human use virtually its entire length to where it enters the Pacific Ocean a third of a mile below Finca Los Suenos.

The Rio Rosario constantly infiltrates a series of Nicoya complex aquifers that sit below our basin. Our three wells tap these aquifers that are 30-50 meters deep. The river’s waters infiltrate the aquifers year round. Government flow tests done on our wells in 2013 measured abundant water flows – “enough for 550 Costa Rican homes.” Yes, our abundant water sets us apart from most other coast area developments, especially those in the Nosara area that face water restrictions annually.